Skip to content
Hi! I’m Kerry Lambert. I’ll be reviewing music for GeeksUnleashed as often as possible. You can find out a little more about me on the STAFF page. Mark has kindly interviewed me as an introduction to the site so here’s my first post. An interview with.. Well.. Me.

You’ve been touring with Incubus recently. What’s that been like?Touring with Incubus was a teenage dream come true. If you’d told me when I was 14 That I’d one day be doing arena tours with them I’d have screamed. We’ve been out with a couple of bands who were complete ass holes so it was nice to find that Incubus and their crew were the friendly and welcoming. All the shows were incredible. Italy in particular. They seem to love fiN there more than anywhere else. We got mobbed outside the venue and asked for photos and autographs, which was mad considering we’ve only played in Milan once before. 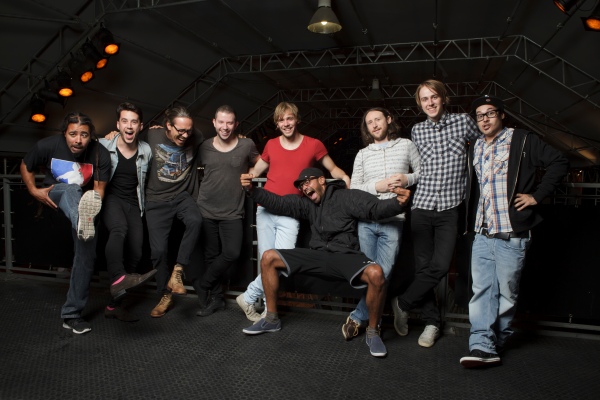 Any highlights of the tour?Aside from just the whole experience of being on tour with childhood heroes!? I think making our drummer Simon wear a frog costume on stage in Holland was up there.. Just because, being the rhythm section, we have our little moments of making eye contact on stage and seeing him sweating his tits off and mouthing “I’m so fucking hot” during one of our songs was funny as hell.

Tell us a bit more about fiN? How long have you been playing with them?
I’ve been in fiN since Nov 2008. It’s been one hell of a journey so far. We do everything ourselves so that means, recording, production, artwork, videos.. Everything you see is done by ourselves. Our drummer even tour manages us. Because of the way we do things we can’t pay anyone to sell merch for us so we always end up outside the venue after every show meeting the crowd and selling our vinyls and T-shirts. If you come to a show… Look out for us!
You’ve mentioned that fiN have DIY style to your music and production, how has this come about?The DIY thing really came about because of the sheer frustration of not being able to get our music out there. These days the only type of bands getting signed seem to be quick flash in the pan, “cool” bands that are here today, gone tomorrow. We wanted more than that for ourselves so we decided not to even give a label the chance and just do it on our own. It’s hard work but I wouldn’t change it for the world.

Artisan Records, your own record label. Can you tell us more about them and how this was formed?
Artisan Records was named after our debut single “The Artisan”. One day I’d love to A&R for it and start signing other bands. Who knows what the future holds?

And before fiN? Were you in any other bands?

I was in a post hardcore / rock band in the early to mid 00’s called “Days of Worth“. We were signed to Visible noise, the same label as lost prophets and were touted by Metal Hammer magazine as “The future of British rock”. Makes me laugh when I think about it. We only had one album out and a couple of videos on Scuzz and were dropped by the label. Shows what good record labels are! I have been playing bass for around 13 years. I started out on guitar, like so many of us bass players do. I always really wanted to be a bassist though. I can’t say why. I just prefer the instrument.

When you’re not playing music. What other bands do you like to listen to?
I listen to everything really. Radiohead, Aphex Twin, Bjork, Fugazi, Foals.. A mix of rock and electronic music.
Any favourites at the moment?

Only just discovered Bon Iver’s self titled album. It’s incredible. The first track “Perth” is so special. – [That’s NOT my first review by the way]

And when it’s not music, what else do you like doing?

I’m a bit of a gym nut. I love weight lifting and cardio. Not very Rock’N’Roll to be honest but that’s me. Also love taking and editing photos on my iPhone.

I know you’re a big Instagram fan, is photography something you’re passionate about?

Photography is something I’ve been interested in for a few years. My Girlfriend is very good at it. We have these two framed photos on our wall that she took that really made me want to get creative with photography. One is a totally abstract image of moving lights that looks amazing. The other is a very “Instagram” style shot of the Hudson bridge in New York with the Sun glaring down just above it. It’s all out of focus but it was the blurry nature of this shot and the lovely retro feel that led me to find Instagram. I am now hopelessly addicted.

I intend to get some interviews of up and coming bands and I shall review new music for you when I can. I may even make a column in which I bore the living shit out of you all with nutrition tips and new weight lifting routines. I joke.

Image disclaimer: I’m happy to give credit where credit is due. email me Kerry [at] artisanrecords .co.uk