Growing up in Britain in the 1980’s if you read comics you either read The Dandy or The Beano. Or, if you didn’t spend the rest of your pocket-money on sweets you might even have read them both, though that was frowned upon where I grew up. I was definitely a Dandy kid. I was a fully paid-up member of the Desperate Dan Pie-Eater’s club.

According to several news sources The Dandy, the UK’s longest running regular comic is facing closure. The publisher of the comic DC Thomson, is carrying out a wider review of all its businesses and it appears that The Dandy is under threat.

Home to Desperate Dan and other characters such as Korky the Cat and Bananaman, its circulation had recently dropped to below 8000, from its heyday in the 70’s when it regularly sold 2 million copies.

While nothing has yet been officially confirmed this is sad news for a comic that means so much to a lot of people. But perhaps it is inevitable in a world in which children have instant access to cartoons, games, music, movies and TV on their television, computer screen or smart-phone.  How is a cow-pie eating (although not since 2001 and the BSE crisis) cowboy with a huge chin possibly supposed to compete with that?

DC Thomson has tried to inject the title with elements that would attract more readers, with the launch of Dandy Xtreme in 2007, and the introduction of celebrities into the cartoons. But unfortunately nothing has been able to stop the decline in readership figures.

Even if The Dandy closes down, the character of Desperate Dan and some of the other main ones will no doubt carry on in the digital realm some way. They could also appear in The Beano, DC Thomson’s other main comic title.

I’m sure more news on this will appear over the next few days and weeks, but for now here’s a selection of images from the pages of The Dandy. 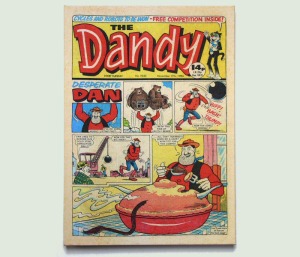 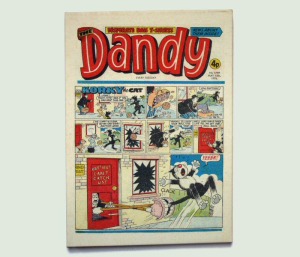 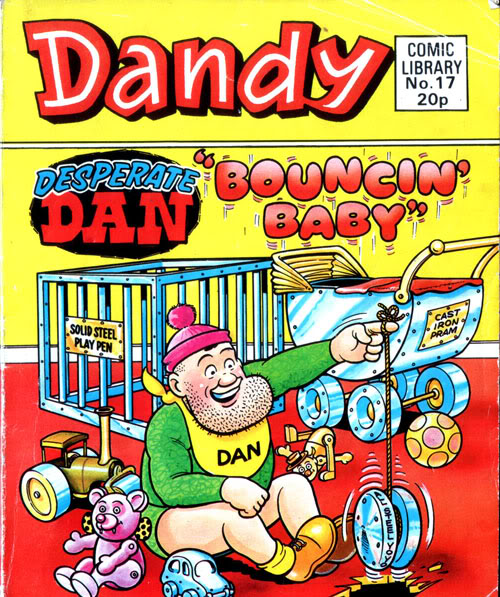