Back in July at the San Diego Comic Convention Marc Silvestri announced along with the rest of the Top Cow team that they would be the first major U.S. publisher to use Kickstarter to relaunch Cyberforce for 5 issues and to get the comic into peoples hands for free with the goal of reaching $75,000. As of yesterday Top Cow hit their target and with three days left is well to hitting $100,000 and if so Top Cow has in their most recent announcement have promised to give soft copy editions of Cyber Force Volume 1 to libraries who want the book and won’t have to pay the wholesale price and they will also work with charities that provide free comics and book to American troop to get the books to them for free.

This is an amazing thing that Top Cow are doing by people the comic book company for the people but also  hopefully bringing new fans into the comic shops as well as helping libraries and American troops.

Geeks Unleashed.Me was lucky enough to catch Marc Silvestri to find out more about the project.

MARK: Can you tell us more about the planned storyline for Cyberforce? 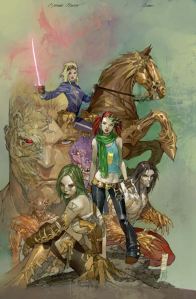 MARC: This new Cyber Force is a true origin story and a near total reboot from the original 1992 series. In fact, the Cyber Force “team” doesn’t actually exist through the first four issues. There’s a lot about the original series that I didn’t really like all that much so this do-over going to correct that. No more mutants and blue people running around. We’re looking at a very grounded world and we’re going to spend some time learning about it through the eyes of our characters and in their actions.

Cyber Force is the story of our survival as a species that while epic in scale is told at a very human level. I’ve always been fascinated with the idea of us humans being too smart for our own good and nothing conveys this better than when we stand next to (and eventually behind) the things we create. Technology wouldn’t exist without mankind and now we find ourselves in a position where we can’t survive without technology. We’ve basically turned the tables on ourselves.

It takes tens of thousands of years for nature to adapt to change and survive and this is where we’ve pretty much screwed things up. For the first time in our history our intelligence has outstripped our natural ability to evolve and adapt and in turn survive. Our physical selves simply can’t keep up with our need to have things be faster, smaller, lighter, and more convenient. The clock is ticking on all of us and in the new Cyber Force a few of the unlucky know it. It’s global paranoia fed by the things that vie for the attention of modern society like twitter, facebook, phone apps, porn, and yes, Justin Bieber.

MARK: The rebooted Cyberforce has been described by you as a “bio-cybernetic steampunk”. Can you describe how cybernetic and steampunk will work together?

MARC: I’m a huge fan of steampunk as well as the bio-mechanoid aesthetic of the movie Alien. The problem I was running into while trying to find the right “look” is that both those genres have been kind of done to death. My solution? Mash them together and create something with a bit of both and then call it something snazzy like bio-cybernetic steampunk. The tricky trick we pull off here though is that the new aesthetic is only used for the high-tech world unseen by the regular folk in the books. All the non-techy stuff is grounded in the world we all know and (sometimes) love.

MARK: You have said that Cyberforce is a comic that is very close to your heart. There will be a lot of fans who have been there from the beginning and who will also feel the same way. Will original fans be satisfied with this new twisted version of Cyberforce? 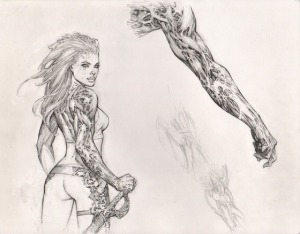 MARC: I think they’ll be more than satisfied but way more surprised at the twists and turns coming. The concepts and characters are much deeper and richer to the point that Matt Hawkins and I are using Game Of Thrones as our template in telling an epic yet intimate tale. Add to this the fact that Cyber Force is far more relevant a concept today than it ever could have been twenty years ago and I think fans both old and new will be drawn in hard and fast.

MARK: How much of the old Cyberforce will be brought forward to this reboot?

MARC: Enough to be recognizable as Cyber Force but we’ve trimmed away all of the fat as well as mutants and the silly blue people.

MARK: You have said that you wanted to do this for free to get non-comic readers into comic shops over a period of 5 months to get them used to it in the hopes that they would stay past issue 5. What inspired your desire to try and convert non-comic readers in this way?

MARC: With a market flooded by mutants this and new 52’s that, we needed to shake things up a bit in the way the big two won’t/can’t. Top Cow, and Image in general, have never had time for the status quo and quite frankly, we’re sick of hearing nothing but how publishing has grown stale and is going the way of the dinosaur. It’s great that quality films, games, and TV shows are being adapted from comics but everybody seems to be afraid to at least try something new in publishing. Alternate and exclusive covers are swell and all but they can take you only so far so we figured that giving away a full color comic in both print and digital form was a cool idea to get interest flowing, so far so good.

MARK: Obviously the Kickstarter project has been generating a lot of interest across the media but what kind of advertising and promotion will you be using to get non-comic readers into stores to pick this up?

MARC: Once people see that we’re serious and that it’s working, media traffic will increase on its own. But we have a few ideas to get awareness up.

MARK: Are you seeing the first five issues as a mini-series or the beginning of an ongoing series continuing past issue 5?

MARK: This is the first time anyone has ever done anything like this before in the comic industry. You have said it is because you want to be a comic book company for the people and give something back to us for free but judging by the huge buzz this has generated was this also done to shake up the comics industry and generate interest in this book?

MARC: One of the reasons that we’re giving it away online as well as in print is the sheer number of eyeballs that will see the book. That’s also the reasoning behind making Cyber Force available to torrent sites, people are going to download it anyway so we say: if you can’t beat `em, embrace `em. And if all goes as planned hopefully at least some percentage of those online readers will continue picking up the book even when it’s no longer free. That said, we’re as curious about this as everybody else!

MARK: Since launching Image Comics 20 years ago technology has moved allowing digital comics to be a big part of the comics world and social media has really exploded over the 6 years as evident by this Kickstarter project. Did this feel like the right move? 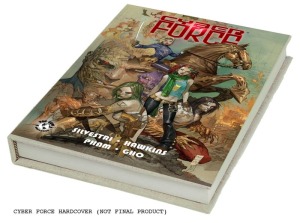 MARC: Once Matt Hawkins and Filip Sablik approached me with the kickstarter/free idea there was no doubt and no turning back. Plus Image has a track record of not being afraid of embracing and even creating the new!

MARK: The Top Cow Universe is primarily a supernatural universe with mystical artefacts and characters like Witchblade and the Darkness; how will the relaunched technology-based Cyberforce fit into the same world?

MARC: Seamlessly. Although there is no supernatural element to Cyber Force, I’m one of those geeks that believe science and the supernatural are twins separated at birth. You won’t see any direct crossover initially but Cyber Force is definitely part of the reborn Top Cow universe.

Mark: For those people who haven’t had a chance to back this yet, I am not one of those people and have backed this. What can you tell us about the incentives?

MARC: We’ve got so much cool stuff to give away that it’s probably easier just for people to head over to our kickstarter page. But I can tell you that there will be hardcovers and special editions available only through this program, my original covers, interior pages, and concept art, personal art lessons from me, writing and publishing advice from Matt Hawkins, smartphone cases, original sketches and signatures, dinners, personal appearances, trips, and even a cover by me for your comic if you are a self publisher. And that’s just a few of the incentives! I also want to point out that although we’ve reached our funding goal, we encourage fans to keep pledging to the project because all the money we get goes into more free stuff and will allow us to do things like getting Cyber Force out to U.S. troops serving our country, underprivileged kids and libraries.

MARK: What’s next for Marc Silvestri? What other projects are you working on that we can look forward to?

MARC: Your guess is as good as mine but I figure it’ll have something to do with creating more ideas, more art, more movies, games, and some TV shows thrown in for the hell of it. Oh, and having a hell of a good time just being a part of all that is comics!

You can keep up to date with the project on their Kickstarter page or on Marc Silvestri’s Facebook Page. Big thanks to Marc Silvestri for the interview today.