A lot of people may already have read this comic book a few weeks ago when it was originally scheduled for release. The weekend before it was due to come tragedy struck in Aurora, and DC Comics made the decision to delay the release date of the comic. However by the time they took that decision retailers had already received their copies. DC asked retailers not to sell issue #3 until this week. Some retailers complied, some didn’t. I’m not looking to address the question of whether retailers were right to do this or not. There have been many opinions on comic book sites and blogs about DC’s decision and the position it put retailers in. I can understand DC’s reasoning and I respect the fact that they made a difficult decision.

What I know for sure is that my LCS did not sell the book and kept it back until this week. Whatever their motivations for doing this it has meant that I have had to wait a few more weeks than I expected to read this comic book. Was this a big deal? No.

Was it worth the wait? Damn right it was.

One of the reasons I enjoyed this issue so much is the appearance of Matches Malone. First appearing in Batman #242 in 1972 Matches Malone was a New Jersey gangster whose identity Bruce Wayne took on when Matches died. Known for his plaid suits, tinted sunglasses and carefully cultivated hair, his name comes from the match that is permanently fixed between his lips.

In issue #3 Batman and his sidekicks continue their investigations into The League of Assassins re-emergence in Gotham and Talia’s suspected plot to have Damian killed.

In the first few pages we really get a sense of how insidious Leviathan is. A school teacher is abducted and replaced by one of Leviathan’s many members. We see Leviathan’s influence reaching into the police, and the heart of the justice system. It is clear that Leviathan is moving steadily and swiftly into all areas of Gotham society. The way Morrison and Burnham illustrate this is really sinister, and the Gotham that we are shown on these pages reminds me of the broken Gotham we saw recently on screen in The Dark Knight Rises.

Morrison’s dialogue sparkles, and jumps off the page. As ever, Damian has the best lines. “How does it feel to be the class clown and no-ones laughing, Grayson?” is his retort to a gentle jibe from Dick.

Damian has been grounded to maintain the outside world’s belief that he has been assassinated. However he soon slips free of Alfred and dons a new guise as ‘Redbird’, striking out on his own to tackle Leviathan. Burnham’s art is superlative in this sequence. On one particular page he has 15 panels, but somehow prevents the page from looking over-crowded or busy. It is a perfect example of comic book storytelling using images alone. 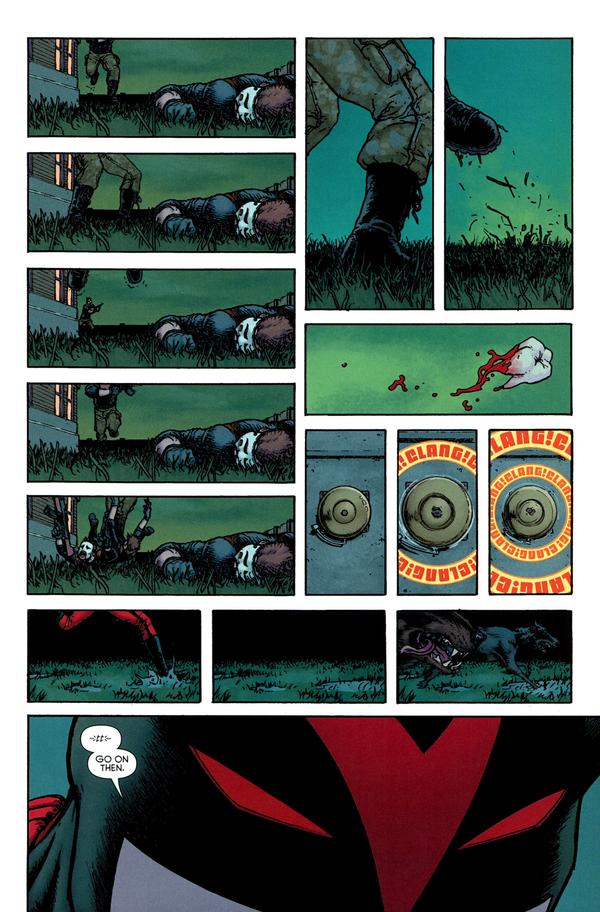 I’m really enjoying this series. Morrison and Burnham are a great team and they just seem to be getting better. And we’re only on issue #3. How good is it going to get?