Today Woo Jung Ho, better known to the world as Violet, passed away after battling Leukaemia for almost two years. Violet was a Starcraft professional gamer. 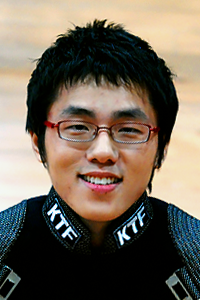 Making his professional debut in 2007, the nineteen year-old Violet had a staggered start to his Starcraft career. Dropping into KT Rolster’s B team, he found himself in the zone where most upcoming gamers disappear, unable to regain the confidence and persistence required to climb back up. Violet took the time to work on his game and improve, coming back in 2009 to take games from players like HoGiL, Bisu and Hyuk (And asking Flash to take their series to 3 games).

As well playing the game, Violet also crossed the barrier between South Korea and The West. Giving an interview to Team Liquid as well as being a regular on Starcraft forums and communities. Violet was always humble, playing down suggestions that he could be one of the next top players and always praising those he felt deserved credit. How any player can have a 16-4 (wins/losses) and say they still feel “too inadequate” is beyond me, but that was Violet, an ambassador for the game.

I’ll leave you with one of his matches.