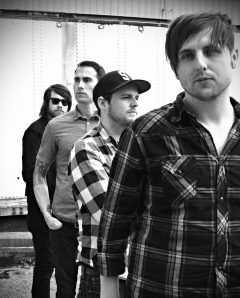 In 2010 they reached no.50 on the Billboards charts, out of 200, in a few simple weeks in America, no easy feat when you have Rihanna, Gaga in there, throw in the premise of a Blink revival and LostProphets on the move.  They have out-seen a lot of success to the American market, through at least, a hundred bands – and counting – out there contributing to this market during this period, Sum 41, All Time Low, Black Veil Brides, all very well established and with major record labels behind them  But what sets Hawthorne Heights apart from the rest?

Well, allow me to try to answer this.

At once, a relatively unknown band from Dayton, Ohio going under the name of A Day In The Life since changed from 2004 to Hawthorne Heights, named after the famed Dark Romanticist author Nathaniel Hawthorne (Look up The Scarlet Letter), and in a recent interview with Geeks Unleashed, Drummer Eron Bucciarelli answered that;

“We changed our name because JT was the only original member of  A Day In The Life.  Micah, Casey and I were second generation members of ADITL.  Matt would have been the fifth generation bassist, so it didn’t make sense to continue on under that moniker playing songs that most of us had no hand in writing.  ADITL was a little more pop-punk leaning and we all wanted to add heavier elements”

Something that has worked to this day, and with the added but never forgotten cataclysmic death of Casey Calvert in 2007 has only made the band form more brilliantly than ever (Just listen to Four Become One on the album Fragile Future)

So with the Death of a friend and bandmate, lawsuits, setting up their own label –Cardboard Empire Records –and a whopping 7 albums in 8 years I just had to ask them about their work commitment.

7 albums in 8 years, setting up your own label.  Would you say that you are one of the hardest working bands out there?
“I can’t comment on other bands’ work ethics, but we like to stay busy and our fans demand new music!  As creative people, we’re happy to oblige!”

There is not one sense of arrogance from the band, they are all hard working and experimental.  One of the

first things you’ll notice about Hawthorne Heights is that they are, quite simply, nothing new.  But that doesn’t faze them because you can hear every particle of passion cascade from their lyrics, their singing, their instruments, just them, themselves.  Call them Screamo, call them emo, alt. Rock, Pop-Punk, Melodic rock whatever you want, but they are quite simply, Rock and not scared of encompassing any other sub-genre that comes underneath that Standard Bearer of Rock.  You can hear each of the afore mentioned departments of rock within the superstore of music, you can hear, not how this band progress but how they interchange, dabbling in the arts of one theme – the electric sound on for example – then leaving it only to come back to it on a later album with a vengeance.  Jack of all trades and soon to be master of many.

With their new album Hope the “unclean vocals” have made an energetic return and are not overused or underdone, balancing out the melodic sound of singer JT Woodruff and adds a defiant contrast to the ‘poppier’ elements in the songs.  Hope is part of a musical trilogy that they have been working on with the earlier album Hate, Hope is definitely a much more rounded and finished product, leaving the gruffer notes on the previous album and making Hope a lot more incisive.  You can hear the precise angle the band is taking, still a rock album but with a more punk feeling, very prolific and visionary lyrics, an album worthy enough to significantly boost themselves up the Billboard Charts.  With the upcoming European tour added to their already large workload the band are in high spirits, and with determination to become bigger and better than the “competition” out there;

“We’re certainly more hopeful at the moment.  We have a lot of really exciting things in the works between new music, taping for a reality show called The Upcomers, Australian tour plans and much more.  We’re in the best place we’ve been morale-wise in several years!  We’re really excited about getting back to Europe once again.  We’re playing several places on this tour that we’ve never played before, which has us the most excited.  When we started, we never saw the importance of traveling abroad.  We’ve since made it a priority to get to Europe at least once a year if our schedule permits.”

So as you can see, there’s no time for themselves but this is not to say that they only think about work, I wanted to know more about their other sides;

You owe a lot of instant breakout success to MTV airplay, how do you think Beavis and Butthead would take to you?
“I think Beavis & Butthead would love the lead girl actor in our Saying Sorry video – you can practically see her entire ass at the end.  I know they would love that!  I think they’d have a field day making fun of JT’s facial expression when he has coffee thrown in his face in the middle of our Niki FM video – we even laugh at that!”

So, Hawthorne Heights are here, and to stay, to pave the way for many bands and to sit triumphantly on top of the rest of their genres, not saviours of Rock but definitely adding to the rejuvenation of this genre and any other branches of it and success keeps churning in, just look at some of the venues they are playing ; The Sugarmill (Stoke-On-Trent), Magnet Club (Berlin), Traffic Club (Rome),  and The Barfly (London).  All of them stunning and very well established venues, not ones to take a risk if they didn’t think it was worth it.  Hawthorne Heights are reaching to bigger and better things and I’m pretty sure the heights won’t just stop.

Their European tour kicks off on the 19th September at the Audio in Brighton U.K.  For all other Tour and Ticket information visit http://www.hawthorneheights.com/