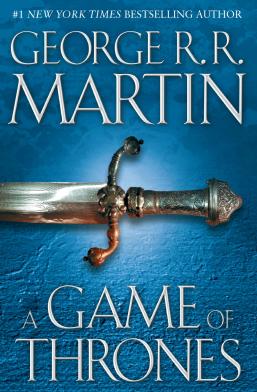 I am about to attempt something. Something big. Monumental, even. I’m going to try to do a relatively unbiased review of the first installment of George R.R. Martin’s MASSIVE series: A Song of Fire and Ice, the namesake of the television series A Game of Thrones. As a lover of the fantasy genre it is hard to stay impartial, but I’ll give it a go.

For those who don’t know, each chapter of the book is written from eight different perspectives, each a major character within the story (most of the Stark family, Tyrion Lannister and Daenerys Targaryen) following a few different narrative threads, which I am not going to give away. I’ve seen other reviews in which people had a problem with this:
‘Thanks for holding my hand Martin, but I don’t like this technique. The chapter headings, I’m referring to. It encourages me to start wondering about the character before I’ve even started reading. “CATELYN” the chapter title reads: is she young or old, a peasant, a farmer, a daughter, a mother, nice, mean… I start imagining things and then have to correct it all as the character is revealed during the chapter.’
For one, I would say that if one chapter name can get your imagination working (you said it yourself) it is a fairly effective way of engaging your interest in the named character, even if they don’t conform to your preconceived image of them- I do have trouble understanding this particular complaint. I have to admit, though, that sometimes I was so interested in what was happening from one perspective (Daenerys) that I didn’t want to switch to another one in the next chapter (I’m Team Targaryen all the way, in case you’re wondering).

Set in a land very like medieval Europe if it were governed by extreme and unpredictable seasons of seemingly unnatural duration (the UK?), I would say that A Game of Thrones attempts to blend (it pains me to say this) ‘gritty realism’ and a more creative, sprawling land that supports an entire world with distinctly different cultures, terrains and morality. I found that Martin balances these quite well. To use what examiners might call an ‘illustrated example’ (I’ll try not to ruin anything), the situation north of The Wall is the stuff of fantasy, but when the Crows discuss it, they discuss it in real terms. There’s not much in the way of high-flown prosing, rallying and immediate solving of morale problems. The problem feels real because it is discussed in a believable way (understaffing, lack of resources… the kind of problems you might hear in a debate about the NHS or front-line policing, but more foul-mouthed).

Speaking of which, a common complaint I have seen in reference to A Game of Thrones is that of misogyny, sexism and rape. Also, the sex. Lots of sex. Some critics point out that sex and prejudice wasn’t in Tolkien and therefore, has no place in what is essentially ‘just a fantasy novel’. I disagree. Everyone who has at least seen the LOTR films knows that there is generally animosity between elves and dwarves, though it is perhaps less known that some elves went to the extreme of hunting certain families of dwarf. However, I’d say that this is more understated in LOTR as the series (and The Hobbit) was originally written as children’s fiction, so we’re not about to see an elf disembowel a dwarf but if he were writing again for a more mature audience, would Tolkien change his writing style? I hope so (hopefully, there would be a bit less poetry and singing).

What I am trying to say is that a different audience necessitates a different approach to writing. Martin is able to explore a less sanitised world where, for the want of elves and dwarves, men degrade other men and ultimately, do the same to women too (as we have seen in our own very real past). To maintain the level of realism that Martin achieves throughout A Game of Thrones, I think it is necessary to reflect real attitudes, be they good or bad – some people are just bastards (I’m looking at you, Snow).

Now for the problem of Too Much Sex. I am a little squeamish about sex scenes in literature because they can be cringe-inducing and just anatomically wrong but in this case, I’m going to have to make an exception. Aside from anything else, sex functions as a major motivation within the plot itself, ranging from What Bran Saw to the reason why Cersei is such a bitch. If you were to remove the sexual aspects of the book, you would be removing an important part of the human relationship- and relationships (romantic, political and familial) are the foundation of the political drama within the novel.

Overall, as an embarrassing fangirl, I’d recommend that you read A Game of Thrones and the rest of the Fire and Ice series (unless you’re following the show like I am, then read one book per series. I do love a surprise). It is a sprawling fantasy and political drama that combines supernatural elements with ‘gritty realism’ and balances them well. The relationships are complex and have huge bearing on the plot. As a work of fantasy, A Game of Thrones is much darker than Tolkien, but I would say that it is a good example of the genre for a more mature audience. If you enjoyed The Hobbit or the LOTR, I’d say you should give it a go.