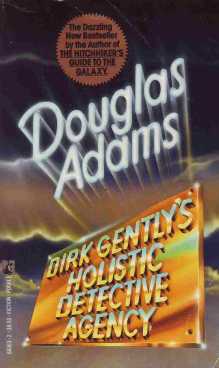 ‘What do a dead cat, a computer whiz-kid, an Electric Monk who believes the world is pink, quantum mechanics, a Chronologist over 200 years old, Samuel Taylor Coleridge (poet), and pizza have in common? Apparently not much; until Dirk Gently, self-styled private investigator, sets out to prove the fundamental interconnectedness of all things by solving a mysterious murder, assisting a mysterious professor, unravelling a mysterious mystery, and eating a lot of pizza – not to mention saving the entire human race from extinction along the way (at no extra charge). To find out more, read this book (better still, buy it, then read it) – or contact Dirk Gently’s Holistic Detective Agency. ‘A thumping good detective-ghost-horror-whodunnit-time travel-romantic-musical-comedy epic.’ -The author’

As much as I love the Ice and Fire series, there is a writer I love more: Douglas Adams. This time, I cannot attempt to be objective. I really loved this book. It is the first of two completed Dirk Gently novels and the inspiration for a slightly disappointing series on the BBC (with the exception of the brilliantly grumpy secretary Janice Pearce, played by the one and only Lisa Jackson).The series was not as great as it could have been- unfortunately, Stephen Mangan couldn’t pull off Dirk’s natural logical eccentricity and some of my favourite Gently moments just didn’t happen. Suffice it to say that there is no beating the books this time!

Set (mostly) in the present-day UK, Dirk’s aim as a holistic private investigator is, ostensibly, to recover a missing cat, but I won’t spoil the ending for you. Along the way, there are bored horses and horses in the bathroom, surprised murder victims, impossibly stuck sofas and time travel, courtesy of the Mysterious Professor’s telephone company. This is all made possible by Adams’ use of useful plot devices (the fundamental interconnectedness of all things) that are both convenient to the plot and amusing- readers of The Hitchhiker’s Guide to the Galaxy might remember the Infinite Improbability Drive being used in a similar way. Personally, I found these both amusing and less contrived than the major plot points of some contemporary work (thinking particularly of The Wasp Factory) that make me suspect that in new popular culture, plot twists have become obligatory (thank you, M. Night Shyamalan).

Grumbling aside, the thing that I like most about all of Adams’ work is his unique expressions and descriptions. I may be unreasonably amused by this because I am a lover of whimsy, but I particularly enjoyed his discussion of the cognitive and opinionated nature of a horse:
‘So what of this horse, then, that actually held opinions and was sceptical about things? Unusual behaviour for a horse, wasn’t it? An unusual horse, perhaps? No. Although it was certainly a handsome and well-built example of its species, it was none the less a perfectly ordinary horse, such as convergent evolution has produced in many of the places that life is to be found. They have always understood a great deal more than they let on. It is difficult to be sat on all day, every day, by some other creature, without forming an opinion about them. ‘

Whether you read the book or not and whether you like the book or not, there is one important message to take away from Dirk Gently’s Holistic Detective Agency: be wary of your horse. They are onto us. If I may leave you with some advice… Stay vigilant in the bathroom.