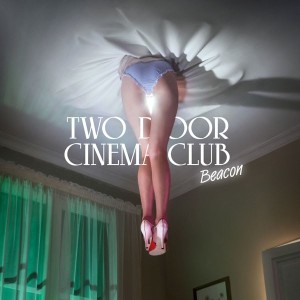 Two Door Cinema Club tasted success at a very young age after the release of their debut record ‘Tourist History’ in 2010. It was quite a test for the young musicians back then: suddenly they were touring the world and performing to excited crowds at packed venues. Now Two Door Cinema Club are already an experienced and established collective who have come to the crucial stage of album number two. This point is marked by ‘Beacon’ – the follow-up to the debut that easily crosses this important border and discards all the questions concerning the band, if there were any.

Two Door Cinema Club confessed in various interviews that after being on the road for a long time they were really excited to get back to the studio, which helped to make the process of recording ‘Beacon’ go without unnecessary pressure. This excitement, mixed with desire to create new songs, lights the whole album brightly. ‘Beacon’ follows a smooth, flawless course where songs flow almost seamlessly into each other. The record fascinates with fizzy sparkle of the sound, fresh summer feel, sweet, clear vocals of Alex Trimble and signature dance Two Door Cinema Club beat. However, there’s an obvious step up from charming naivety and innocence of ‘Tourist History’. While recording ‘Beacon’ the band had more time and opportunities to experiment with different equipment in the studio, so this freedom, together with the hand of the talented producer Jacknife Lee, makes the record more exquisite, rhythmical, better-crafted and braver. The band toy with edgy electronics, heavy passages and, inspired by The Beatles’ approach, take ‘Beacon’ to a new creative, imaginative level. Cheerful, amicable rhythm wraps up deep lyrics full of nostalgia, sadness and homesickness. A lot of the songs for ‘Beacon’ – a reflective, thoughtful offering – were written on the road and there’s a clear away-from-home conception felt in the record. But travelling should be understood here in a broader sense than just moving from one place to another, but also like progressing in life, changing, becoming different. These changes are exactly what Two Door Cinema Club have been going through: over the past couple of years they’ve matured a lot both – as musicians and as personalities and this newly acquired maturity cannot be hidden.