There are key moments which individuals remember from their childhood and when growing up. During the formative years, experiences contribute greatly to what interests someone for the rest of their lives. Being the home of Geek, I think we can all agree that hobbies and games form a basis for what we enjoy and take interest in; and indeed comfort in, within and throughout our adult lives (assuming mostly adults are reading this).

– If you’re a kid. Big Welcome and tell all your mateys about this site. And be a Strong Geek! –

Star Wars is a great example of this. If you are a child of the 70s or 80s and into Sci-Fi then it’s pretty much guaranteed that you love this. Granted, it IS AWESOME! But would you love it as much if you watched it for the first time now? I’m guessing, probably not. I have friends who have watched Star Wars for the first time in their late twenties or early thirties. Friends who have heard me going on about it for years and after I have finally got them to watch it (probably with me), all I have got from them is a tepid, ‘Yeah it was alright, not really sure what all the fuss is about though really’.

I was going to use lukewarm instead of tepid thought the Skywalker pun was too weak. It was? OK, I’ll get on then.

I believe that the various media which we consume and have a keen interest in when we are young can have a lasting and sometimes profound impact on us for the rest of our lives. I can still to this day quote almost the entire script of Pulp Fiction. I know full well the same would not be true if I was to premier it today. Pulp Fiction has, at an early age, drugged my brain into giving me a warm and satisfied feeling every time I watch even but a scene.

TV shows can be a different beast altogether though. A film will remain unchanged, but a show can go on for years, usually year upon year but sometimes, and in the case of Red Dwarf, can take the odd hiatus. The first Series (not Season, this is a British Show thank you very much) premiered on our cathode ray in 1998. I actually had to re-check this, but incredibly it first showed on BBC Two in 1988. I was 8.

I won’t go into detail about the plot. If you have got this far then you probably know full well what the crew of the Mining Ship Red Dwarf have been up to and if you are after further details then a good place to start is Wiki, where you can get into a good ol’ Wiki loop.

We will also be featuring a few top moments of Red Dwarf over the course of Series X of Red Dwarf, so please keep coming back and as always let us know what you think.

Well, the initial feel of the new Series of Red Dwarf is really rather good… this makes me happy. Red Dwarf has not aged well. It was a Series which was commissioned off the back of a book and as such, the BBC only gave the franchise an excessively low-budget. The crew did wonders; it’s not all about spending money on sets. If we watch The Lord Of The Rings we need to visualise being in Middle Earth but the same is not for Red Dwarf of old.

Red Dwarf tugged at the heart-strings of a million Geeks because it is Real. The plot line was absolutely ridiculous, but you know what, that didn’t matter at all. All the characters, whether it be a bloke, a dead bloke, a bloke made out of metal or a bloke who resembles your cat, it made a great sit com. A Sci-Fi Sit-Com, the weirdest of weird Sit-Com but a Sit-Com nonetheless,

The early years of Red Dwarf were the Golden Tears. They were pioneering somehow, using the money they had at their disposal to convey isolation in deep space in a comedic way. I think that the lack of money made the show. As it got more popular, so the money flowed. The last couple of Series had a lot mot spend, but in the wrong way. Damn, the use of Green Room was sickening. It didn’t look slick. It looked S!!!! 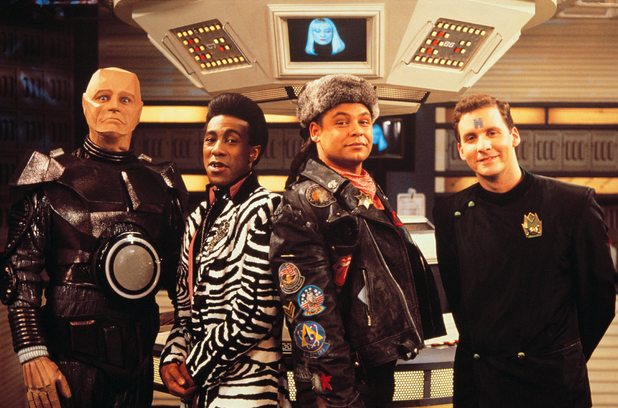 The new Series feels like they actually listened to what the fans said, what YOU said. Gone are the relentless green screens and what is back is what we fell in love with. Sharp dialogue, play on relationships, idiotic situations which we all find ourselves in and being in positions where we need to be with people that we don’t really want to be with.

Red Dwarf is back folks. I can’t wait until next week. It’s just like I remember and I SMEGGIN’ LOVE IT!