Following from last weeks one word teaser from Marvel with three words – Savage, Amateurs and Superior, Marvel.com have confirmed what was on everyones minds; Savage is indeed going to be a Wolverine relaunch and the title will be Savage Wolverine and the singular creator on the teaser is because Frank Cho is doing both the writing and the illustration of the title. 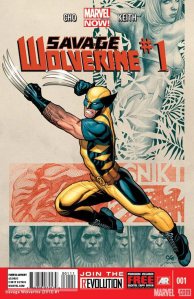 The title will also star Shanna the She-Devil as they both have to survive each other and the Savage Land, Frank also promised that there will be no Ka-zar but there will be indeed be Dinosaurs. With his hook for the latest Marvel NOW that this will be a great jumping on point and won’t require much knowledge of the characters past as well as introducing new characters. The new title will be debuting in January 2013.