Zombies are fast becoming an integral part of popular culture, with the Walking Dead really taking the spotlight in both comics and AMC’s television show, Geeks Unleashed provided you with a “How to Survive a Zombie Apocalypse” last month in preparation of the arrival of World Zombie Day to Central London’s streets which took place last week and underlines the increasing fascination of the undead.

Halloween brings out the dark side in many party goers with extravagant horror costumes and prosthetics designed to not only shock and scare friends and family but to raise a smile too. 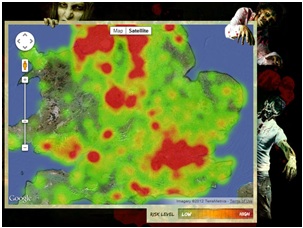 The zombie theme is set to be one of the most common trends at Halloween parties up and down the country and according to this clever heatmap at Zombie Invasion it would appear the number of zombie fanatics is spreading!

The map is driven by three years’ worth of sales data of zombie paraphernalia from allfancydress.com and we think this is a really unique way of pinpointing the towns and cities with the biggest numbers of wannabee zombies at Halloween.

You can dive into the map and zoom in on your home town and its surrounding area to see just how many other people are going to transform themselves into spooky subhumans over the Halloween period. The map includes a risk level key ranging from green to red – low risk to run for the hills!

The microsite plays on the threat of a real-life zombie apocalypse and includes a host of tips for scared members of the public to keep track of the feeding frenzies and survive one-on-one zombie attacks.

From a reliable pair of running trainers and a lightweight weapon to a believable disguise there are plenty of ways to survive the UK’s worst zombie attack on October 31st!

Be sure to check it out before the zombies reach your front door trick or treating!