Today heralds the last ‘switch-off’ of an analogue TV signal here in the UK. At 11.30 this evening, Northern Ireland will join the rest of the UK in receiving no analogue signal, resulting in Televisions UK wide solely accepting digital television signals. 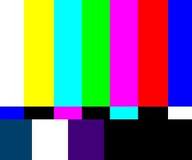 So what is the significance of this and why does this get a mention on Geeks Unleashed?

Well, I certainly remember growing up in an era where the thought of receiving a digital signal to my television would have been completely alien to me. I though myself lucky enough to have a 14” Sony Colour Television in my bedroom when I was a wee nipper. Obviously you could get better TV’s at the time but being a bit of a hand me down, and not being in a position to buy a new TV for myself,  I was still stoked to possess it and to have it in my room.

A small aerial which resembled a mess of coat hangers sat proudly atop and what looked like the first ever video player formed it’s base.

I remember having thoughts that I was so lucky to be a boy in this age, where we could get television into our bedrooms, and all I had to do was adjust my aerial every time I changed channel. How could things ever get any better?

It brings a contemplative smile to my face, thinking that my little nephew who is 1 year old will experience the world of technology in a completely different way to myself.  At ten years old, he will no doubt have the equivalent of my little set up in his room, although his TV (or viewing station or whatever it will be a decade from now) will be wafer thin boasting myriad channels which will be crystal clear and a gaming system, not loaded by a cassette tape like my Sinclair spectrum, but powered by thought and transmitted directly to the vision synapses in his brain.

OK, perhaps that last example may be pushing it a bit far, but if he turns out to be a reflective little lad, he may well think, like his Uncle before him, that he is blessed to be growing up in the most technologically advanced moment our civilisation has ever experienced. And he may also find it hard to conceive of the next stage in tech evolution.

But, unless some major global event manages to befuddle the human race, you can bet your Commodore 64 that evolve it will, and onwards we will travel.

The mighty Ceefax* (named apparently because it allowed you to See Facts!) is a causality of the analogue / digital switchover and will also cease to be tonight. As a result, I’m sure there will be plenty of middle-aged citizens scratching their heads in the coming weeks as they will have to finally learn how to use the internet to learn how to check the Racing or to book a holiday, but again, this demonstrates the evolution of tech, and how things just never stand still.

So, as the last analogue TV signal in the UK tears through the skies over Belfast, perhaps stop and take a moment to think about how far we have come, where we are going and the technological advances we are making everyday. 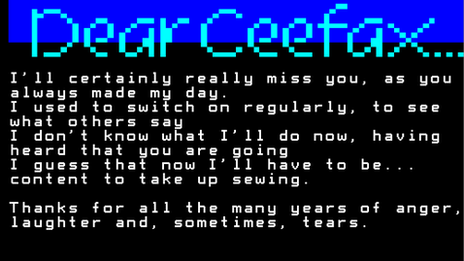 * Note – Ceefax, for our international readers, is a text based service which you can (or should I say – could) access through a standard TV, mostly covering News, Weather and Sport, but also had a magazine element covering celebrity and gossip and was a surprisingly popular channel for booking package holidays.