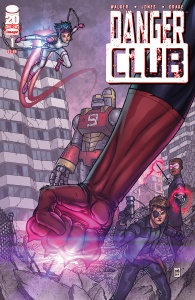 With the World’s greatest heroes departing Earth, never to return, to fight “the deadliest peril the universe has ever known”, Danger Club concerns the sidekicks who remained and who will have to confront this threat. The big, bloody prize-fight, although the centrepiece of the opening issue, was not the be all and end all of this exciting collection.

Each issue opens with a wonderful interpretation of comics from yesteryear and the following pages are crafted with equal skill, with action sequences akin to those of Romita Jr’s in Kick Ass (a popular comparison, I know, but it’s true). Credit here to Eric Jones (Tron: The Ghost in the Machine and Supergirl: Cosmic Adventures in the 8th Grade) and colourist Michael Drake for summoning the comics of the golden age.

It is, however, in stark contrast to the artwork which follows. Jones’ eye for detail surpasses most in modern comics today; action sequences leap out from the page with their brutality and realism. I particularly loved the Nick Fury swipe-panel.

By issue 4 what was a dark story has become a black one as tensions among the sidekicks reach a critical point, whilst others seek answers to the fate of the lost superheroes. Landry Q. Walker’s script is among the best in comics today; he enthrals the reader with characterisation and what I presume is his post-apocalyptic take on the Teen Titans, which itself was created in response to the increasing popularity of Marvel’s Uncanny X-men back in the day.

If you’ve waited for the collection, you’re in for a treat. If this one passed you by originally, don’t make the same mistake again. This is another hit series by Image Comics.  Scratches an itch I didn’t know I had.

Check out our six page preview of issue 1 below.

All images courtesy of Image Comics.