Can you believe that it’s nearly 2013 already? Where has the time gone? When I think about “this time ten years ago”, my mind automatically takes me back to the ’90s. Remember those times? Back when Michael Jackson  was white, but didn’t look like he’d been hit with a brick? When Cartoon Network  and Nickelodeon  were good? Back when Justin Bieber was too young to have any impact on the world? I miss that era! That’s why, in this week’s blog, I’ll be taking you on a nostalgia trip to the post-noughties with my top 5 toys of the ’90s!

These freaky hamster-owl-hybrid toys are making a comeback, and I’m scared as HELL! Look at their eyes… They just… They just stare into my soul.

All of my friends had Furbys, so, being the impressionable little girl I was, I got one too. Words can’t really express the mental anguish that that furry ball of Satan caused me. It pretty much just sat in the corner of my room, staring at me. Even simple phrases like “I love you” and “I’m hungry” freaked me out, especially after I dropped it on the floor and the voice-box-thingy went all demonic and made the thing sound like something out of Slender.

They will rise up against the human race one day. One day soon. Mark my words.

As an adult, I now realise how horrendously euphemistic those adverts were. I still have my super soakers. You never know when you’ll need to shoo some unruly youths away from your property. Super Soakers were like penises for pre-pubescent, non-sex-focused males: the bigger your Super Soaker, the cooler you were. One of my neighbours had a CPS 1500, and all of the girls loved him. Size really does matter, boys.

(Quick note: I know that Super Soakers are still around after being bought by Hasbro and now have a Nerf-like design, but the less said about them, the better. They will never compete with the original). 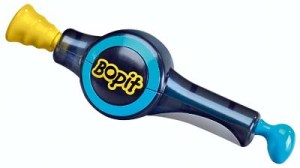 Ahh, the Bop It – that addictive fast-paced audio game that started out in 1996 and remains popular today. It’s one of those games you either love or get frustrated with because you have no hand-eye co-ordination (I’m the latter).

Some of the later editions are a pretty accurate depiction of my sex life, to be honest. 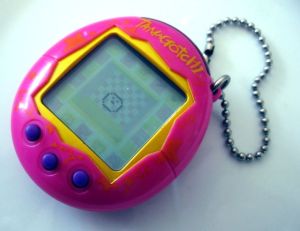 Arguably the most iconic toy of the ’90s, the Tamagotchi will always be number 1 on my nostalgia list. This little handheld digital pet became my best friend, and I’m not afraid to admit it. Starting off as a little egg, I mothered the f*** out of it until it became an adult. It was almost like having a real pet – I hated seeing it unhappy or hungry, and I always made sure it was within reach of me at all times.

Well, until I got bored of it, obviously.

What are your favourite toys from the ’90s? I’m probably missing tonnes. Let me know in the comments, because obviously I’m not on the brink of nostalgia-tears already.

… Yes, nostalgia-tears is the official term.