The only changes are in the old 30 pin Dock connector and the processor. Talking about the processor, however, can create some interest. So let’s discuss a report shared by arstechnica about the iPad 4 technical review. According to arstechnica: 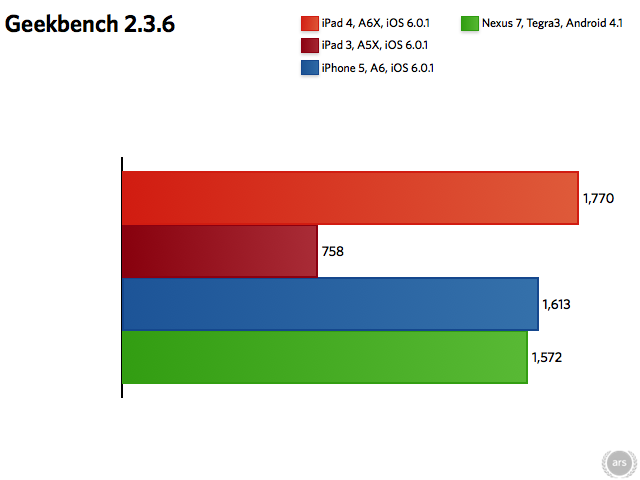 “Using Geekbench, the overall performance of the A6 core is indeed well over Apple’s 2x claim. The A5X-powered iPad 3 manages a respectable 758 overall score running at 1GHz. The A6X trounced it, turning in an overall 1,770 running at 1.4GHz. Like the A6 in the iPhone 5, the A6X can dynamically change its core frequency to use more or less power as needed. The “Swift” core can run as fast as 1.7GHz, though we never measured it going that high in our testing.

What’s perhaps a bit surprising is the dual-core A6X can more than keep up with the ARM-based quad-core Tegra3 (such as found in the Google Nexus 7 or Microsoft Surface). The “Swift” core is using a slightly revised design similar in some respects to the Cortex A9 in the A5X and Tegra3. It uses an optimized memory architecture that moves data in, out, and around the cores much faster than most ARM-based mobile processors. The end result is that Apple’s processors seem to be getting more performance from two slightly faster clocked cores than other devices running four cores.

Looking at some JavaScript benchmarks, A6X deliver improved performance, but that iOS’s Safari browser seems to make the iPad browsing experience the one to beat in the tablet space. In the Sunspider benchmark, the iPad 4 easily bested the iPad 3. It also trounced the Nexus 7, and managed to beat out the Tegra3-based Microsoft Surface. (Note the Surface fares far better than the Nexus 7 in this test, which is heavily dependent on a platform’s JavaScript engine.)

The iPad 4 also scored very well on Google’s own Octane JavaScript benchmark. It runs twice as fast as it does on the iPad 3, but also beats out the Nexus 7 by a wide margin. For comparison, Surface did not manage a great score on this test when we reviewed it recently.

Digging into the A6X’s graphics abilities, GLBenchmark is used. Both the older Egypt Classic test and the newer, higher-quality Egypt HD test was used, both on- and off-screen. The off-screen test renders to a 1080p resolution, and is not limited to a device’s display refresh rate typically 60 fps max. This gives an idea of the GPU’s raw power. The on-screen tests show just how well the GPU can pump out pixels to a device’s actual display. After all, the 2048×1536 pixel Retina display has over three million pixels to update.

On the Egypt Classic test, the A6X’s four SGX554 cores pretty much hit the max at 59 fps. When allowed to run free at just 1080p resolution, the GPU chews through 133 fps. That’s over 50 percent more than the A5X’s four SGX543 cores could handle on the same test.

Even compared to the Nexus 10, which runs the next-generation Exynos5 processor from Samsung, the iPad 4 easily holds its own. Our own Nexus 10 is still undergoing testing deep within the Ars Orbiting HQ, but Anandtech benched the Nexus 10’s Mali T604 GPU well behind the A6X’s SGX554-based design. Rendering at the Nexus 10’s high 2560×1600 resolution, it only manages about 26 fps on the Egypt HD test. Rendering offscreen at 1080p, it still only managed about 33 fps.”

So how you feel it in your hands?

If you are performance conscious and you didn’t change your old iPad to an iPad 3, then I think it might be time to make a decision. I am certain you will feel the better performance of the new gadget. The other aspect I forgot to mention is the experience of a Retina display. If you are weight conscious about your tablet and this is the reason that you didn’t upgrade to the iPad 3, then you should probably go for iPad mini because there is no weight change in the iPad 4.

If you were waiting for something that can compete with the latest Android and Windows tablets, then don’t worry because this fourth-generation Apple tablet holds its own, especially in terms of performance and battery life. The Nexus 10 is, so far, the only device that appears as though it can compete when it comes to display quality, and it certainly is a bit cheaper. But, we all know that Apple never wanted to win the race of competitive pricing within market. They have always been more focused to win battles in terms of performance. Even at $499 to start, the iPad is still a great value overall.