Some days the passage of time blows my mind.  I remember who I was and what I was doing in 1989 (not a lot of significance).  Admittedly, the news that the Berlin Wall had come down factored more heavily in my mind that year than the establishment of Valiant Comics, but rioting and radical political upheaval in the Eastern Bloc is a pretty big news story that drowns out a lot.

1989 was a special time for everyone, not just East and West Germans.  It was the tipping point of culture from the glitter eye shadow and pointy-nosed sports cars into poor literacy (2 kewl for skool (end me, please)) and ‘wicked, awesome’ explosions.  The 90s saw a wave of comic book characters which all seemed to be tapping into the same vein of massively muscled, gun-toting ‘dark and gritty’ realists.  Suddenly the noble, shining armour, do-no-wrong hero was crowded out in favour of boobs, guns and big neck-vein throbbing yelling (also poor grasp of anatomy.  There are already hundreds of muscles in the human body, no need to go making up new ones guys).

But let’s not imagine there weren’t some good characters and interesting ideas in the turgid depths of the 90s comics scene.  It’s easy to look back on that old art, which now looks so dated, and think ‘goddamnit, past us!’, when it was just the style of the time.  I kind of like that a decade had such a distinct identity.

Are some of these characters and ideas worth resurrecting?  Valiant Comics think so.

The company has a long, impressively dramatic story of its own rise to popularity and its fall into the hands of companies unwilling to publish comics.  It’s pretty well documented so I don’t think we need to dig up them bones.  I’m more interested in now.  With its resurrection, Valiant Comics has bought back the rights to previous characters, being X-O Manowar (writer: Robert Venditti, artist: Lee Garbett), Harbinger (writer: Joshua Dysart, artist: Phil Briones), Bloodshot (writer: Duane Swierczynski, artist: Manuel Garcia) and Archer & Armstrong (writer: Fred Van Lente, artist: Emanuela Lupacchino).

But what was their previous vision for them? 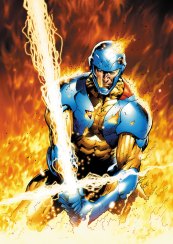 X-O Manowar was, I believe, a Visigoth, as in the tribe that sacked Rome.  I guess they felt Rome wasn’t doing a good enough job and they could no longer defend its actions to the shareholders.  Aric of Dacia (our friendly neighbourhood Visigoth) was as keen to lay waste to the Roman empire as the next man (that being Geoff ‘I Hate Romans’ of Dacia), but ended up being abducted by aliens instead.  The original story is one I would describe as glorious pulp science fiction.  I’m all about glorious pulp science fiction.  Instead of using a gimmick portal or suspended animation to displace Aric the Visigoth from his native time plane, they use good old quantum physics and the law of relativity to explain why sixteen hundred years had passed on Earth to Aric’s handful on the spacecraft.  That’s the kind of thing I go nuts for, because it elevates a series out of usual comic book magi-science that has only the barest gloss of reason applied to it, to something a little bit more grounded in reality.  Relatively speaking.

What I do like about Valiant Comics, is the bold way they are quite happy to explore the dark side of having powers, without making the story a caricature of grizzled, angsty revenge.  The narrative makes no bones about how messed up some of the stuff the kids in Harbinger do is.  The series just lampshades the fact that a teenager with phenomenal powers will misuse them for his or her own benefit without thinking things through.  Teenagers are kind of self-centred like that.  With great power comes spectacular ways to screw up the world and everyone around you for your own gain.  That’s a more human reaction than finding out you have immense psychic talents and immediately thinking that what you really want to do is work a suicide watch.  Maybe you don’t have evil intent, because very few people do, but it’s pretty human to want to serve your own needs.  Like getting that really attractive person to notice you and think you’re cool.  Is there menace in it?  Not really.  Is it wrong?  Yes.  But the other characters call them out on bullshit, so it’s a more mature take on things because it doesn’t just make out that it’s fine.

Bloodshot is one of those series you either love or hate, I think.  The name instantly drags you back to the 90s and some of the cover art fills you with that dread you haven’t really escaped.  You have Bloodshot himself, who is your basic soldier/agent type, his head is stock full of sensitive information on account of suffering partial brain death when he was … er … partially killed.  They (being a rather foggy government sort of bunch) wanted to make a perfect soldier by filling the empty parts of his recollections with past battles and personnel files and all kinds of knowledge pertinent to killing a whole bunch of dudes.  His sense of identity is appropriately muddy for someone filled with so much information not pertaining to their own life.

Archer & Armstrong are more up my alley.  The former is an expert martial artist and marksman raised through his teens in a Buddhist monastery after his parents tried to kill him.  As you do.  His weapon is a crossbow, so why the monks decided to call him ‘Archer’ and not ‘Arbalist’ is up for debate.  His surname is Archer so we’ll go with that.  Armstrong is fat, debauched and immortal.  I guess if you’re immortal you would be more interested in drinking until you throw up (and then drinking your bodyweight again) because consequences are for other folk.  Their story is a buddy “cop” story, a genre I’m kind of a sucker for actually, involving just about every religion you can think of wanting to have a go.

All very nice, but what’s the vision for the future of these guys?

By now you may have a handle on what Valiant Comics is about.  If you haven’t, I’ll just put it into fewer words: No Compromises.

Valiant Comics have Harbinger intent on creating a better world, by force if necessary, Archer & Armstrong fighting Nazis in the Himalayas (how can you not love that series?), Bloodshot taking his nanite-riddled self into the dark underbelly of the organisation that made him and X-O Manowar (and Aric) fighting an alien invasion.  But the most interesting thing here is that all these series intersect and take part in the same universe.  That might not sound amazing if you’re a regular Marvel or DC reader, but it’s not all that common for a comics publisher to have all their series belonging to the same world.  Mostly because it requires a lot of double-checking the lore to make sure nobody directly contradicts someone else.

With Valiant Comics’ commitment to telling stories well and not being afraid to get their hands dirty in terms of complex characters, the resurrected series are well worth checking out and they’ve got everything to prove so the stakes are high for them.