Contains MILD SPOILERS for ‘Death of the Family‘. 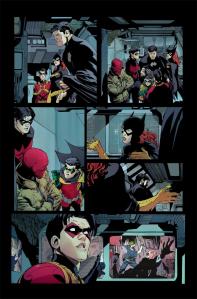 “The Joker…he’s been away from a year, so he’s been watching them all year long, and everything that they care about it something that he can burn to the ground” or so says Scott Snyder in an interview with The Washington Post.

In issue 14 of Batman, the Joker claims to know who the Bat-Family are, however, this is somewhat undone by the plot in Batgirl #14 – “that’s part of the big mystery…whether or not that’s true is one of the big conflicts and mysteries of the story”.

“That’s one of the brilliant things about the Joker; he takes things that his adversaries think are strengths and convinces them that they are actually weaknesses.”

Whilst artist Greg Capullo continues this theme in a chat with DC Comics blog, The Source – “the Joker is good at is getting inside people’s heads, right? And so, if he can get in their heads and start to divide and conquer, how much easier is it for him to execute his plan? Which is to destroy the Bat-family. So we’re going to start to see the seeds of destruction come to fruit here in this issue (15). And as we saw, The Joker has possession of Alfred. There’s a very disturbing scene in this issue, carrying that ball forward down the field.”