Comic Book author & Screenplay Writer Steve Niles has been a widely known and revered name in the Comic Book world since the publication of his hugely successful 30 Days of Night series back in 2002. Originally a rejected film pitch 30 Days was shopped around and eventually picked up and optioned by IDW who released it’s debut followed by two concluding parts, which despite not being an overnight success was strong enough to be noticed by several film production companies and was

Eventually adapted into a big screen motion picture of the same name by Columbia Pictures & Ghost House Productions in 2007, with the help of Evil Dead  Director Sam Raimi, the three part Comic was re-released and converted into one collection including a Hardback version. Soon enough numerous successful follow-ups, Graphic Novels and Books followed. Steve began to pick up much acclaim, and a resurgence into some of his older creations and offers to write for some of the most renowned Comic book publishers in the business, including Dark Horse & DC, for which he eventually contributed Gotham’ second son Simon Dark, and Dark Horse’ Dark Noir series Criminal Macabre. He is also now about to see the release of another part of his 30 Days of Night series, a crossover with the Criminal Macabre world in Final Night, published by IDW & Dark Horse Comics. We had a chance to catch up with Steve and have a chat about this interesting crossover among other things. 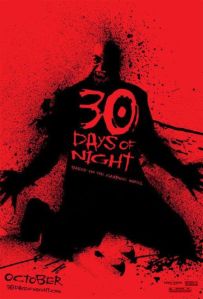 Geeks Unleashed: Along with a few other notable comic book writers, you are credited with kicking off a new sort of renascence within Horror Comics. When do you think Horror comics lost their original potency before you came along?

Steve Niles: I think it was mainly because horror comics fell into a nostalgic rut. For a long time all you could find in the way of horror comics were EC style books, which are great, but follow a familiar formula. The rest of horror comics were mostly thinly veiled super-hero books with darker themes. What I did, and creators like me did, was walk away from the formula and approached horror comics more like horror novels and films; extended stories with 3 acts and multidimensional characters. We just treated it like a viable genre, which it is, and not just the wink and a nod vengeance story.

Geeks Unleashed: Would it be a fair comment to say that doing truly effective Horror comics is much more daunting a task than most would realize, after all I think it’s much easier to scare audiences through celluloid than through art and text bubbles?

Steve Niles: It’s different. Chances are I won’t be able to make you jump out of your chair like you can in a film. My goal is always to creep out, to attempt to crawl under your skin with idea and images that will terrify. My “cheat” has always been to focus on characters. If I can make a reader care about a character then the horror will work.

Geeks Unleashed: So with the Criminal Macabre series the tone is shifted to a more noir and detective style, whilst still keeping the dark and visceral tone of say 30 Days of Night, are we expecting to see Eben does Maltese Falcon?

Steve Niles: That would make Eben the Fat Man, so no it doesn’t quiet play out that way. The series is really split into two and then they collide so we get a bit of a sense about both worlds. Cal’s world is very dark noir while Eben and the vampire’s is just plain dark.

Geeks Unleashed: Your work boasts fresh and original context, but I can spot a few influences myself, especially in 30 Days. Whose writing has influenced you the most in your work?

Steve Niles: 30 Days is dripping with my influences. Two of my favourite films are Night of the Living Dead and John Carpenter’s The Thing. I think you can see how 30 Days reflects that. I’ve been most influenced by guys like Richard Matheson and James Ellroy. I can read them over and over and I do. As far as I’m concerned I Am Legend is a near perfect horror novel. Too bad they haven’t made a movie of that yet.

Geeks Unleashed: One of the most defining things about 30 Days of Night is it’s setting in Barrow, a Town which for one month every year turns to night. Do you think concepts and ideas like this (be it in comics, films or books) are needed much more now in modern horror to draw more interest from audiences, rather than it being just a straight up vampire tale set anywhere in the world?

Steve Niles: When you can find a high concept like this one it can never hurt but I don’t think they are necessarily needed. Great when they happen but good horror boils down to characters and timing. I’ve seen a lot of great concepts destroyed because they didn’t do these things. You don’t need the high concept but it certainly does help put asses in seats.

Geeks Unleashed: Another really great thing was how you presented the antagonists as much more monstrous and fearsome creatures in contrast to the more Cavilier-esque vampires that modern audiences had become over familiar with over recent times. Was the main aim to make Bloodsuckers scary again?

Steve Niles: That was the main goal, yes. If anything 30 Days of Night came from the fact that Ben and I thought vampires had lost their potency as a monster, Vampires had become a joke. They were dating teenagers and Kung Fu fighting their way through movies. There was nothing scary about them at all. So making them like land sharks with no attachment to humans besides as a food source seems like the right way to go.

Geeks Unleashed: So after the Criminal Macabre crossover, what’s next for the 30 Days of Night series? With the recent boom of T.V horror like American Horror Story, Walking Dead and Fear Itself, there is clearly a market for real effective Horror on T.V, and Vampires couldn’t be more popular, could you see it making a stab on small screen?

Steve Niles: Early on Raimi talked to me about a possible TV series but nothing ever happened. As I’ve said before, one series will end as a result of Final Night. Because deaths in comics have become a joke I want this to have lasting effects. So we’ll have to wait and see if 30 Days of Night or Criminal Macabre has any future at all. I’m prepared to walk away from one of them.

Geeks Unleashed: November has just seen the release of Lot 13, which you did for DC Comics, which is more toned to the classical horror roots. The story revolves around hauntings from the past and spirits of the dead unleashed on a relocated everyday suburban family. Does it feel refreshing doing something that has a different style from what you are most known for?

Steve Niles: I wrote Lot 13 almost 3 years ago. I was in a very, let’s say, dark place and some of the stuff that came out makes me squirm a little. Lot 13 appears to be a traditional ghost story but it is also me dealing with my own contradictory views on spiritual and life after death issues. It felt really good to do something so different and then seeing Glenn Fabry’s art sealed the deal, He’s doing the work of his life.

Geeks Unleashed: Comics books publishers like Dark Horse, IDW, Image and Vertigo all employ adaptations of existing media tie-ins culled from the likes of film, T.V or Games. For instance, Image’s very successful Walking Dead and Dark Horse’ Mass Effect series sell well. In your opinion do you think this is broadening comics in a good way to capture more of a wider audience, or condensing it and causing a lack of original concept and material?

Steve Niles: Honestly, there are good adaptations and bad ones. I prefer new and original comics but I understand some people love these series. I did an X Files series not long ago and had a tremendous amount of fun. For me the challenge was making it appeal to X Files fans. I don’t think adaptations extend the market though.

Geeks Unleashed: Aside from any of your own what is your favourite comic book which you are enjoying the most at the moment?

Geeks Unleashed would like to thank Steve Niles for his time and graciousness. We would also like to wish him good luck on the new crossover Comic and his sure to be even more prominent future.

Criminal Macabre: Final Night – The 30 Days of Night Crossover #1 is out on December 12th.

Criminal Macabre: The Final Night is Written by: Steve Niles.