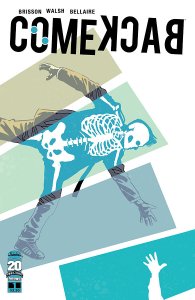 Recommended – a proficient introduction to an “intriguing premise”.

Written by Ed Brisson, with artwork by Michael Walsh, Comeback #1 was Stephen’s pick for the ‘Wednesday Watchlist’ earlier this week, which prompted me to read it.

Stephen had been impressed with Brisson’s work in Jay Faerber’s Near Death, and on hearing the “intriguing premise involving a secretive organisation which sends agents back in time to rescue people moments before their deaths” to reunite them with their families, he was (quite rightly) “really excited”.

Having devoured Philip K. Dick’s work as a teenager, I was equally excited.

And Brisson skilfully crafts this first issue into an enjoyable yarn – Reconnect is more than a company, it’s an opportunity for good. Retrieving loved ones from the past before their mortal end and reuniting them with their loved ones is a noble endeavour, albeit exploited for profit.

The issue falls short on expanding upon its concept and character development, both of which are key when the miniseries is scheduled for 5 issues. However, Comeback #1 raises questions, tempting the reader back next month.

We previewed the issue earlier this week, which featured Jordie Bellaire’s (Journey Into Mystery, The Rocketeer and Nowhere Men, #1 on sale November 28, 2012) beautiful colours. Michael Walsh’s artwork, particularly in facial expressions, is somewhat reminisce of Charlie Adlard’s – in that the pencils lack fine detail. However, when packed with Bellaire’s colours, the effect is more than the sum of its parts.

Comeback #1 dips a toe into the deep waters of its concept, worthy of a second chance next month.