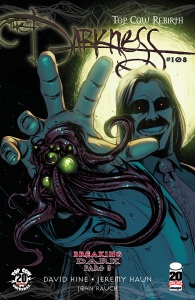 Highly Recommended – Jeremy Haun’s artwork is well suited to the tone of David Hine’s excellent story; that each of us has a dark side, which isn’t oft shown.

Selected for the ‘Wednesday Watchlist’ and previewed earlier this week, The Darkness #108 is the penultimate issue of ‘Breaking Dark’, David Hine (The Bulletproof Coffin) and Jeremy Haun’s (Artifacts, Detective Comics) second game-changing arc, in which Jackie’s world has been upturned by his wife’s descent into madness and the emergence of Balakov, not to mention his daughter’s ‘transformation’.

In order to save the world, Jackie Estacado destroyed and then rebuilt it – saving his childhood sweetheart from her untimely end, for a more fairy tale end.

However in the process, out protagonist’s actions have caused ‘a shift in the arrangement of the universe’ – there are now weaknesses in the barriers which guard the portals to his world.

And the ancient ones want in.

That’s the problem with fairy tales – they often have dark undertones.

What’s more is Jackie is now separated from The Darkness, who exists in his doppelganger and whose will is beyond the control of Jackie.

And he’s raising an army, the purpose for which, as yet, remains unknown.

The Top Cow universe is changing, not necessary for the better for its inhabitants, but for the reader it’s a wonder. Whilst the issue lacks the action of the previous outings, it is steeped in characterisation, which is often well-established or absent in mainstream comics – it’s a refreshing change. Credit to David Hine and Jeremy Haun for injecting such verve into a character who was introduced more than 15 years ago (first appearance Witchblade #10 circa 1996).

The ‘big two’ should take note, reboots, whether soft or hard, aren’t necessary the way forward.