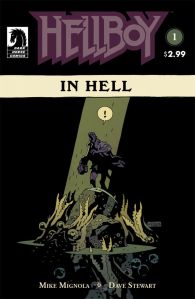 This Christmas Big Red is back and I’m not talking Santa.

And it seems absence does make the heart go fonder.

This week, I was fortunate to happen across a myriad of exceptional comics in my local store, spread across numerous publishers – Marvel/Hawkeye #5, DC/Before Watchmen: Minutemen #5, Image/Creator Owned Heroes #7. However, upon closing Hellboy in Hell #1, published by Dark Horse Comics, I knew I held a comic worthy of ‘Comic of the Week’.

Hellboy’s ultimate sacrifice has landed him in a spot of bother – Hell to be exact. Not the place you’d expect to find yourself after such a gallant act. However, there’s many a familiar face to keep him accompany and a waiting throne, if he so desires.

The Baba Yaga opening frame is a delight, as are the scenes in The Abyss before the action moves on.

The depiction of Hell is not what you’d expect from a series with such a strong Catholic influence – none of the ‘eternal fire’ I learnt of as a boy or the ‘endless suffering’. More apparent was reference to Dante’s Inferno – has Hellboy entered the first of nine circles, limbo? If so, expect lust and gluttony to quickly follow. At least he has a spiritual guide via Dickens’ A Christmas Carol. Amongst the final panels there’s also a nod to one of the five rivers of Hades, Lethe – the river of forgetfulness (and oblivion).

Mike Mignola returns to draw this Hellboy ongoing story for the first time since Conqueror Worm and it’s a welcome one, despite the excellent efforts of the likes of Duncan Fegredo.

And on his return Mignola has created a fascinating first issue, steeped in Hellboy mythology whilst accessible to the first time reader, albeit with a dash of imaginative thinking. As always, his bare artistry has no equal, whilst his humorous script tickles in all the right places.

Mignola’s strength beyond impressive visuals and humour are multidimensional – often he weaves a fable, where others tell only simple stories. This is a tale only he could tell and we’re promised revealed secrets, as somehow ‘death is only the beginning’.

Issue 2 is scheduled for release January 2nd, 2013, where Hellboy will find himself in Pandemonium – the capital of Hell in Paradise Lost by John Milton.

Join me and him then.