You all must know about the hot topic related to a certain social media platform and its contract with a certain photo editing app. I am pointing towards Twitter and Instagram here. Many have said that it all started when Twitter’s rival social network Facebook acquired the photo service earlier this year. 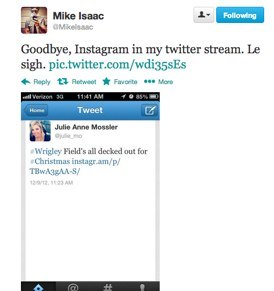 According to Mr. Kevin Systrom (Instagram co-founder) all these changes were done to bring more traffic to the web version of Instagram. Nowadays Instagram is trying to place more value on the web version side and to bring more people’s attention to its web platform. Systrom also added that the users will eventually no longer see the photos on Twitter streams, so perhaps this is the reason why users aren’t seeing their photos in Twitter anymore.

On the other side, news on different platforms suggests that Twitter is also working on implementing Instagram-like photo filters into upcoming version of iPhone and Android phones, which will reportedly be released in time to take advantage of all those Winter Holiday photos.

Eight filters, including a black-and-white filter are offered, and Twitter users will be able to see previews of how each filter changes a photo at a glance via a grid view. Users will also be able to zoom in on photos, as well as employ simple photo-editing tools such as cropping and color correction.

I am not sure if this is all due to the feud between Twitter and Instagram or not, but all these decisions from both sides suggest the same. Though Mr. Kevin Systrom denies that and says that all these changes lead to the new evolution.

According to the source,

He added: “We’ve launched several improvements to our website that allow users to directly engage with Instagram content through likes, comments, hashtags, and now we believe the best experience is for us to link back to where the content lives.”