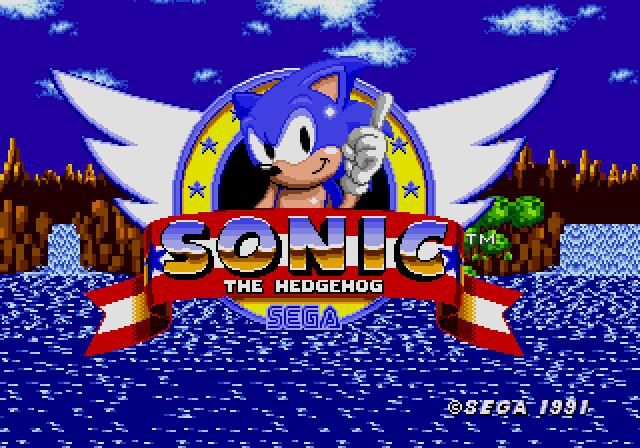 If you’ve yet to hear of the video game Sonic the Hedgehog then you must have been living under a rock for the past 21.5 years. My goodness. Has it been that long? Yes, it has.

Now that I’m feeling significantly older than I was several seconds ago, I’ll continue on telling you how I feel about this particular franchise.

Sonic’s first appearance was in the game Rad Mobile, released in arcades in 1991. It was then it was ported to the Sega Saturn in 1994 under the name Gale Racer.
Sonic’s first major appearance, however was when Sonic the Hedgehog was released for the Sega Genesis on 23 June, 1991 as a mascot that would rival Nintendo’s Mario. Now, I must be honest with both myself and you, dear readers; I adore Mario but I also have had a love affair with Sonic.

Sonic the Hedgehog is – quite obviously – an adorable, blue hedgehog that looks far more cuddly than his living predecessors. However, his speed and ability to jump higher than any living hedgehog put him far above the rest! He is known to “be like the wind” and is reportedly “the fastest hedgehog in the World” – according to his makers.

Don’t be fooled by his looks though; his ability to defeat Dr. Robotnik is unsurpassed.
Dr. Robotnik is Sonic’s nemesis and the bad guy you will fight several times throughout the first instalment of Sonic. Robotnik turns all of the precious animals into cold, unfeeling robots. As you defeat enemies, you realise they are truly just trapped animals who happily scamper off once freed from their machine-like bonds.

As you progress towards the end of each level, take note of the many secret boxes hiding throughout. There will be rings, power ups and speed boosts to help you. Collect enough rings and you will reach a bonus level.

If you find yourself looking for a Sonic fix, there are a few ways of going about playing the original without having the retro Sega or PS1 console. PS3 offers retro games from absolutely free to around £6.18 ($9.99).

You can always purchase a few other Sonic games as well. Sonic 2, Sonic Adventure, Sonic Generations, and the list goes on.

Also look out for games on DS and Wii such as Mario & Sonic Olympic Games! Imagine, two characters – once rivals – coming together for an incredible, modern gaming experience!